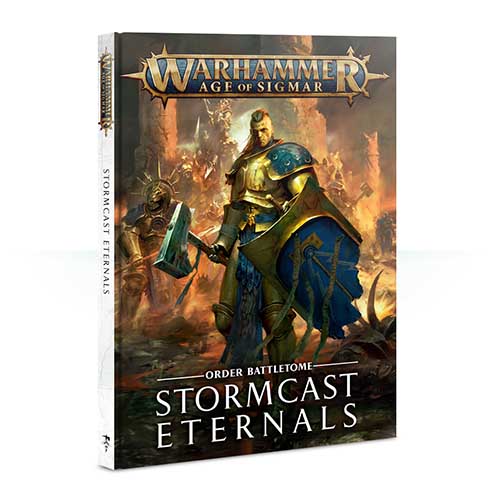 - Warriors of the Celestial Tempest: the origins of the Stormcast Eternals, great warriors plucked from mortality and reforged into sigmarite-clad heroes sworn to annihilate Chaos;
- In Sigmar’s Name: the story of the Realmgate Wars, bitter conflicts fought to control the Realmgates, places of great power that allow travel between the Mortal Realms;
- Life and Death Everlasting: Nagash’s plan to dominate the Mortal Realms, and the necroquake which has resurrected trillions of dead souls, causing a new age of incredibly powerful magic;
- The Works of Sigmar Rise High: details of Stormkeeps, the vast, ornamented fortresses that defend Sigmar’s most vital holdings and send a vital message to all that see them – this is the sovereign domain of the God-King;
- The Stormhosts: a detailed explanation, with illustrations, of the Stormcast Eternals’ army organisation, featuring command structures, iconography and the different types of Chamber – this introduces the Sacrosanct Chamber, dedicated to matters of the arcane and magical, and the Chamber which oversees the process of reforming each Stormcast Eternal warriors;
- Brethren of Sigmarite: details of some of the countless formations employed by the Stormcast Eternals to wage war, along with background and heraldry for the following Stormhosts: Hammers of Sigmar, Hallowed Knights, Celestial Vindicators, Anvils of the Heldenhammer, Knights Excelsior, Celestial Warbringers, Tempest Lords, and Astral Templars;
- A showcase of beautifully-painted Citadel miniatures, with an example army.
Rules
All the rules you need in order to get your Stormcast Eternals army ready for the gaming table are here:
- 50 Warscrolls, covering every miniature available to the Stormcast Eternals faction and including 3 Endless Spell warscrolls – Celestian Vortex, Dais Arcanum and Everblaze Comet – for use with Malign Sorcery;
- Allegiance Abilities representing the Idoneth Deepkin’s methods of war – including Command Traits, Battle Traits and 7 separate types of Artefacts of power;
- Lore of the Storm and Lore of Invigoration 2 selections of spells available to Stormcast Eternals wizards (Lore of the Storm is not available to Evocators, however);
- Mount Traits: 6 tables of special traits available to Heroes mounted on Dracoths, Stardrakes, Gryph-chargers, Dracolines or Tauralons;
- Background, Abilities, Command Abilities, Command Traits and Artefacts of Power for each of the following Stormhosts: Hammers of Sigmar, Hallowed Knights, Celestial Vindicators, Anvils of the Heldenhammer, Knights Excelsior, Celestial Warbringers, Tempest Lords, and Astral Templars
- 2 Battleplans, including objectives for both sides, deployment map, special rules and victory conditions; - Rules for creating a Stormcast Eternals warband to use in a Path to Glory campaign, including a Followers Rewards Table, a Champion Rewards Table and a Path to Glory Battleplan;
- 20 Warscroll Battalions conferring advantages for fielding certain combinations of models;
- Pitched Battle Profiles for all units featured in this Battletome, including unit sizes, points values and battlefield roles.